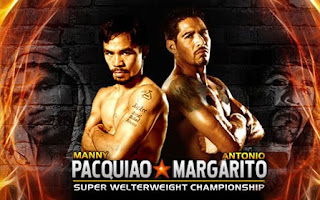 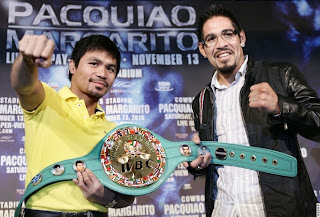 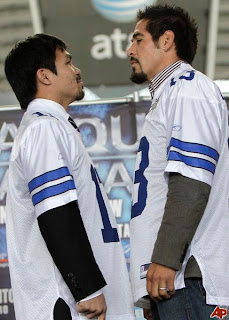 Oh well, there's so many things happening in my beloved country right now...I think there's politics, problems that stems from nature itself, and so many negative things that I don't want to dwell upon since I know that it won't help solve those challenges, anyways. However, if there's one positive thing that I could be proud of as a Filipino citizen and to those who love boxing and the Philippines as a country would agree with me is that there's one positive thing about this place is one name...MANNY PACQUIAO! I can still remember when I was still working back home when he had a boxing match, oh, the streets where so peaceful and there's not one person walking everywhere. My point is, the streets are always busy with traffic, people always on the go and so on and so forth. You bet all of my country's citizens are glued on the television, watching this man fight and knock down his opponent.  There's something in this man that makes our country seems to unite as one. BOXING. The world stops. People stop bickering, fighting, pause for whatever crazy things they're doing and focus on one thing only.

He will be fighting against Antonio Margarito on this coming November 13, 2010. And also he's endorsing his new cologne. By the way, he's now a newly elected congressman in his native province called General Santos City.


Manny seems to be a Filipino version of Superman simply because not only he's a boxer, now a politician, he's also a businessman, an actor and a singer!


Imagine with Manny Pacquiao x Will Ferrell. Enjoy everyone! I am proud to be a Filipino! Mabuhay!