The Miracle of a Mother's Touch 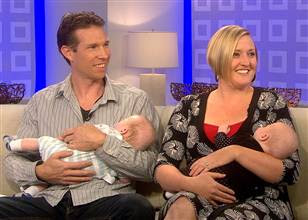 This is just an amazing story that needs to be shared and to celebrate a life the mere fact that the warmth of a mother's body engulfing a dead baby and bringing him back to life. Even if I am not a mother yet, I can very much relate to this story. The miracle and beauty of a baby said to be clinically dead and was brought to life by his mom is referred to in Australia as the "Kangaroo Touch". Read the story below...

"Modern medicine often works wonders, but an Australian mom now knows firsthand the true miracle that can come from a mother’s touch. Kate Ogg was told her newborn son Jamie had died after efforts to resuscitate the premature infant had failed shortly after his birth. But when Kate was given the chance to say goodbye to the apparently lifeless baby, she and her husband, David, found they were instead saying hello to the newest member of their family. Now 5 months old and healthy, baby Jamie and his twin sister, Emily, appeared on TODAY Friday with their proud parents, who told the amazing tale of what happened to them in a Sydney, Australia, hospital last March."Check out the video with the parents below and/or read the rest of the article HERE -->